Often, I hear clients say, “I just need to pick up the phone, sit down and write, stick to my schedule,” etc., but they don’t follow through. My guess is, if it was as simple as taking the next obvious step, they would have done it by now. At this point I usually ask them to pause and reflect on what’s holding them back. What’s hard about what they’re trying to accomplish?

Sometimes the way we look at a situation prevents us from seeing an effective solution because we don’t understand what the challenge actually is.

To explain what I mean, I thought I’d share an exchange I had with an individual who was seeking coaching services. After an exploratory phone call, this person followed up by sending me an email:

“Still mulling it around… I’m pensive in my decision-making here. Part of me feels I know what to do already to be more effective in business; part of me feels there may be value beyond what I think I know needs to happen in engaging you….”

I replied:  “My sense is you know on paper what you need to do and think you should be able to do it.  Kind of like a teenage boy who wants to ask a girl on a date for the first time.  He thinks (it’s obvious to him) that all he has to do is pick up the phone, call the girl, and ask her out. The issue here is that it isn’t that easy. There is more to it. Hence,  the teenager is pensive.  In a way, he is pensive like you are.”

Deep down, the teenager knows he is capable but doesn’t know how to approach the situation. He doesn’t know what the girl is paying attention to. Does she see him as an acquaintance? A friend? Or something more? Intuitively, he knows he can use some help but doesn’t recognize his own uncertainty: How does she feel about him?

Like the teenager, my sense is, you know you are capable but intuitively know you could use some help.  You are pensive because you are not sure what help looks like.

It is hard to communicate what coaching looks like, but I’ll give it a shot.  Let me begin by sharing an experience. I once witnessed an art teacher in a first-grade class teaching her students how to draw. A picture of just the front of a horse was posted in the front of the classroom. In other words, you could NOT see the south end of the northbound horse.

The art teacher walked around the room, repeating to the students, “Look at the picture and draw only what you can see.” Sounds simple, right?

After some time had passed, the art teacher approached one of the students. She asked him, “Are you drawing just what you see?” 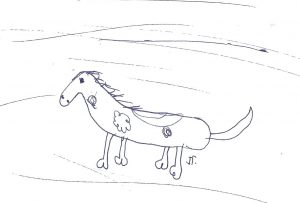 The teacher asked, “Can you see the tail of the horse?”

The student was silent for a moment and then said, “No.”

The teacher asked, “Then why does your drawing of the horse have a tail? Remember, I told you to draw only what you see.”

I questioned the teacher afterwards. She explained the student was NOT drawing what he saw but rather what he believed the horse looked like. Simplistically, the draw­ing exercise was designed as a tool for the child to discover a new way of observing the horse to draw the picture more accurately.

Without the discovery, any drawing would be consistently inaccurate. Put dif­ferently, the child needed to change his mental model of a horse to draw it accurately. In this instance, the teacher was shifting the child’s paradigm.

Think about the art teacher and how she helped the kids learn how to draw.  In the end she was helping the kids pay attention to how things actually are OVER how they BELIEVE them to be. The same would hold true if I coached the teenager. Does the girl like him more than just as an acquaintance or friend… or does he just believe she does?  After all, if he was 100% sure she liked him, it would be as simple as picking up the phone and calling her.  In fact, he would have already done it by now. The fact that he is procrastinating is a clear symptom that he is not clear.  He isn’t sure what to pay attention to.

My point here is this. If something is supposed to be easy (i.e., pick up the phone and call) and you are procrastinating, chances are the obvious approach isn’t so easy. Many times, the hard part is the challenge around figuring out what to pay attention to, like reading the interactions of the opposite sex or drawing an accurate picture of a horse.