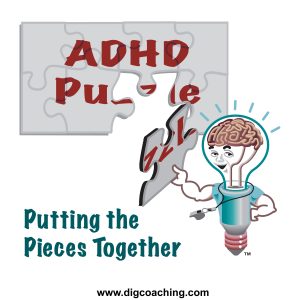 Have you ever wondered how you get things done with ADHD? It’s not that you are lazy or lack the ability to focus. Misinformation like that has given those with ADHD a bad rap. You just do things differently. Somehow you get them done, but you might feel the pressure and stress about how to tackle a deadline.

In this blog, I’ll point out how you can find exactly what systems work for you. The secret is simple. At deadline, you instinctively problem-solve or work in your most efficient way. It’s your system of problem-solving.

A few years ago, a client came to me and expressed frustration. He lived deadline to deadline and lacked the focus his co-workers had. He didn’t have a problem-solving system in place and relied on the adrenaline rush of a deadline to get anything done. I wanted to help him meet his deadlines but also to define what works for him so he wouldn’t have to live like that. Ultimately, my goal was to help him discover how he got things done.

A Method of Processing

I could see that my client was one who thought out loud, which is a common practice for many with ADHD. It was his way of processing, resolving, and retaining information. I asked him to tell me about the last big project he had completed. He said he had left the project down to the wire and then called an emergency meeting of his team. I innocently asked what had gone on in that meeting, whether his co-workers had been the ones to play superheroes to achieve the work at lightning speed. He revealed that it had taken a long time of going over things and that he had done most of the talking while they listened. In the end, he felt strongly that the meeting had been a success in helping him create truly impressive results.

Finding Success in the Clues

Remember, everyone is different. To find what works best for you when you are facing a time crunch or a looming deadline, look at how you have tackled things in the past. In the above example, my client talked out loud in order to process, resolve, and retain. He was unaware of his own method until I pointed it out and he was able to examine his system. Consider your own steps to learn about your method that has led to your personal success.

If you map out how you do things in the face of a deadline, you’ll have the recipe of what works for you! It’s like your grandmother’s pound cake recipe. Once you have it, you can replicate it to get more consistent results.