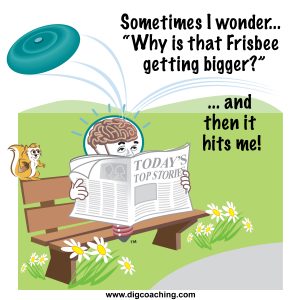 As humans, we are very much appearance-based.  We latch onto what we see, and often, this reliance on what we can see and what we can prove becomes an obstacle and a source of anxiety.

One of my favorite quotes recently is, “The sun doesn’t rotate around the earth, but without the right technology it looks like it does.”  I think this is a great analogy and explains so much about the nature of the tricks, solutions, and strategies those with ADHD find on the Internet.  At the end of the day, many of those things don’t work because they don’t address the core issue.  They deal with appearance.

In coaching those with ADHD, I have found that they define a project as something that’s tangible, something they see through to completion.  I’ve also learned that those with ADHD have an insatiable appetite for learning.  Often, they like to learn what it’s like to be in an experience, and they do things not necessarily to see them to completion but really more as a means to learn.

Let me make this tangible.  I coached an individual who at one point in time had 20 unfinished projects.  As we began to look at them individually, we came to realize that the projects were more about learning than they were about finishing.  For example, he was trying to renovate a bathroom. Ultimately, we realized that the project was actually more about wondering what it was like to be a carpenter.

To renovate the bathroom, he went through the process and basically learned what the experience was like.  Then, when the learning was done, he knew what it’s like to be a carpenter, but the bathroom wasn’t yet finished. The project then became a source of anxiety for him because, though he had achieved his true goal—the learning— the bathroom still needed to be finished.

I think it’s especially important to make these distinctions because, if you’re not aware of them, often emotionally you’re beating yourself up because you’re paying attention to the wrong thing.  If you really begin to realize that you have an insatiable appetite for learning and learning is your motivation, then you can certainly start on projects involving learning. But you must realize that, when the learning is done, the project might not be finished.

Understand the distinction, and you will be in a better position to manage it like never before.  Tangibly, it looks like this: Notice that you’re drawn to do a project and realize it’s really all about learning. The idea is that, before you start a project, you should pause and ask yourself if there’s a way you can learn what this is really like without having a bunch of stuff left to do after you’ve learned it.

Another thought is to realize that, once you have learned what it’s like, there will still be some things left to do. So, before you actually embark, figure out how you’re going to resolve those unfinished issues by having somebody else take over or by hiring a contractor. This awareness also gives you the opportunity to realize what it’s like and to admit that it’s really not going to serve you to do it at all.

The key to this is recognizing reality, removing the emotions, and being able to manage it for what it is as opposed to what you think it is.

More often than not, I find those with ADHD are emotionally upset because they’re paying attention to a project as needing to be completed when, in reality with the right technology, we understand it’s just about learning what it’s like.

This simple awareness and mindfulness can change the game by how you look at it, how you approach it, and how you manage jobs, clutter, and unfinished projects.

If you need help understanding these distinctions so you can move forward, email me at jeff@digcoaching.com.